Prize Mix, an Approved stallion jumping with Meredith Minderman. He is currently standing at stud at Renkum Stud Farm. 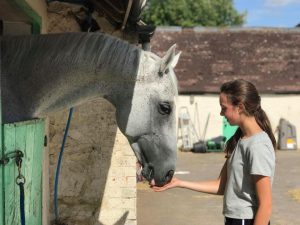 The Studbook for Irish and European Sporthorses was approved by DAERA in Belfast N. Ireland in 2009  as a passport Issuing Office. DAERA is still our ‘Competent Authority’ to grant Permission to act as a PIO.

As N.Ireland belongs to the UK we also had to be Approved by DEFRA, in 2013 an UK office was opened to serve the other British breeders too.

Amongst its members it became known as Breeders Elite because of the Breeders Elite section within the Studbook. In keeping with this an official change of name was granted by DAERA to ‘Breeders Elite SIES’ in 2013.

The structure and the different sections within the Stud book developed and have been established to fulfil the modern demand for straight forward registrations after 27 years of Creation and Management experience of EU approved Stud books.

Grading is done on Soundness and pure Performance Ability  taking into account functional conformation and suitable Temperament. The importance of producing a horse to his/her highest level lays entirely with the owner and is key to up-grading or downgrading in our system.